"Our harvest being gotten in, our governor sent four men on fowling, that so we might after a special manner rejoice together after we had gathered the fruit of our labors. They four in one day killed as much fowl as, with a little help beside, served the company almost a week. At which time, amongst other recreations, we exercised our arms, Many of the Indians coming amongst us, and among the rest their greatest King Massasoit, with some ninety men, whom for three days we entertained and feasted, and they went out and killed five deer, which they brought to the plantation and bestowed on our governor, and upon the captain and others. And although it be not always so plentiful as it was this time with us, yet by the goodness of God, we are so far from want that we often wish you partakers of our plenty."

Much of the information we have about the feast, and this period in the lives of these people, is the result of research conducted by the staff at Plimoth Plantation, the living museum in Plymouth, Massachusetts, that re-creates the lives of the Pilgrims with Mayflower II, the 1627 Pilgrim Village, and a native homesite. From this research we know about the foods and recipes that would have been available to them, and from two first hand accounts(the second was written by William Bradford, Governor of the colony for 33 years, and can be read in Of Plymouth Plantation 1620-1647), we have a good idea of how the village looked, what the colonists wore, how they spoke, what animals they owned and how they lived. We even know what games they played, what their views may have been on everything from their new home to religion and politics. And with all this knowledge, we piece together what foods would have been served at the feast, how the table looked, how the setting looked, even perhaps what the conversation was like.
Posted by Quan at 8:56 PM No comments:

http://www.trantrungdao.com
Posted by Quan at 6:24 AM No comments: 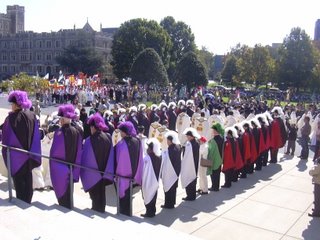 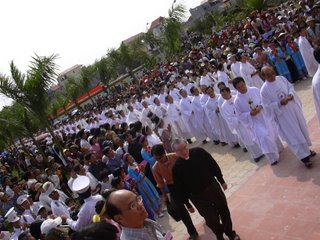 Here is the picture taken on the occassion of inauguration Lang Son Church. I had a really good time with my friends, including both - Son Hue and Son Tien sinh. Lang son town is a really attractive, We had an exciting evening. Mr. Luyen is a really good host. Mr. Khanh also contributed very much for the success of the trip. My Old Landcruiser tried very much to complete his task.
Posted by Quan at 5:56 AM No comments: